That was one of the mottos of marching band when I was in high school.  We traveled as a group of 200 and the buses stopped for no student.  You had best plan your pee.  And with 200 high schoolers descending on a truck stop, you better plan to wait a while when you did get to stop.  It took five buses to get us moved around.

General horse knowledge says that horses can't be potty trained.  We all have stories of horses deciding that it is time to relieve some pressure while in the show ring.  At a recent show, one of the school horses got an error because his halt at X included such a long pee that he was messing with the ride times.  Fortunately, he was allowed to continue.  Theo refused to halt at X in his test because ewwwww, another horse peed there, mom.  He halted a couple feet to the right of X with a disgusted expression.  The judge let us slide.  Most horses can learn to work while dropping off some manure, but you can't really teach them to keep going when they have to pee.  There's not much you can do but hope that your horse doesn't pick the final line up at the end of your flat class to let fly.  It seems pretty random and most people will tell you that when your horse goes isn't something the horse really plans out.

When I go to get him from his field, about half the time he'll see me coming and mosey over to one of his chosen potty spots.  He'll drop some excess weight, then come up to see me.  When I let him out, he goes back to one of those spots and repeats the process.  Most of his field is manure free, it's just a couple of spots that he likes to use. 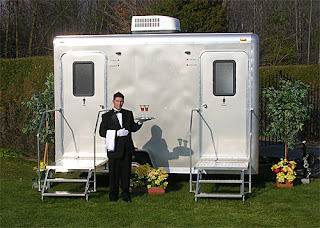 Next upgrade for Theo's field

It's absolutely uncanny.  He looks at me, heads to his spot, does his business, then heads to the gate to start his work day.  I've never met a horse that makes a point of peeing before coming in to be ridden.  And it's not once or twice.  It happens a couple times a week.  I call his name on the way to his gate and he takes that as his cue to take care of any bodily functions before his work day starts.  I will wait with the gate closed until he's done (I don't want to rush him) and when he's done, I go in to get him.

Anyone else have a horse that plans their pee?  Because I've never met one quite this organized.
Posted by Catie at 10:03 AM