Theo is harder to ride in the canter.  At first he didn't want to canter at all.  Keeping him in the canter was an act of several gods.  Over time, that's gotten better.  He's now fit enough that he can do a working canter indefinitely without me dying of exhaustion keeping him there.  He used to have a four beat canter all the time but as he got stronger, it went to three beats. 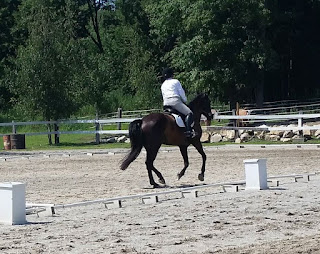 Way back in 2015.  I do not miss the days when I had to basically throw things at him to canter through my Training level tests


Right now, in the collected canter, the four beat has made a reappearance.  It happened at my last show in my right lead canter for my medium into my 10m circle.  After the circle I was able to boot him up in front of my leg and fix it.  It's not particularly visible, we didn't get a rhythm or lateral comment, but I can feel it.  Trainer Z saw it but she's actively looking for it.  I've injected, massaged, chiro'd, saddle fitted, and supplemented.  The consensus is that any pain is well managed but that four beat canter will still show up (minus the resistance) because that's Theo.  He did it for years starting long before we met.  At this point, I think I have to accept that Theo is a horse with a canter that is prone to breaking down.  Verne Betchelder asked if there were any gaited horses in his background.  I don't think so, but it sure would explain some things.

What is whacky is that his canter usually scores higher than his trot.  Judges love his uphill canter, so long as he doesn't go seriously four beat.  They don't seem to notice if the rhythm breakdown is fleeting or minor.  Canter is his better scoring gait but it's the gait where we struggle in training. 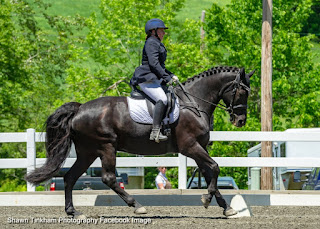 This is Theo at his weakest, right lead collected canter

As we pursue his flying changes, canter quality is becoming a major focus.  He can canter around in a three beat canter all day so long as I'm not asking for real collection.  Trainer D hasn't noticed any issue with a four beat canter but she is very strict with him being up in front of her leg while not looking for a collected gait.  She's working on getting his canter as open and forward as possible.  Once I ask for collection, the rhythm will try to break down.  Now that pain has been ruled out, I suspect strength.  It's hard for him to collect his canter, so he goes back to his default four beat canter. 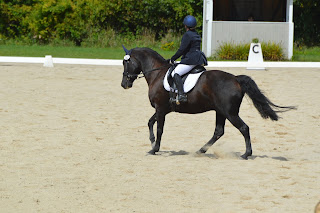 One of our best technical movements (simple change) but yeah, he's weak

Most of this summer I would back off if he went four beat since I assumed pain.  Which was true and I have no regrets on backing off, but now that it's been handled, it's time to push through this and develop a big boy canter.

My plan is to spend the next three weeks jumping and doing a big, forward, three beat canter while taking a break from the dressage.  I mean, we'll still do dressage because that's what we do but it'll be more sprinkled into our jumping and strength focused rides.  Trainer D is on board and ready to spend the next month cantering, transitions within the gait, doing grids, and jumping as strength training. He's a horse that will only do things willingly when they're easy for him.  He needs a lot of cardio and muscle built up if I want him to canter collected without rhythm issues.  He needs more jump which isn't a set of muscles we really focused on this year.  We were all about getting him to actually use his topline and go forward.  So we got push muscles, we even built up some nice carrying muscles, but the jump muscles lagged behind.  We may need to muscle him up to the same level as a Fourth level horse to make him comfortable doing Third.

My entire 'plan' for several years has been 'make him stronger' with slight variations.  Dressage = power lifting, apparently. 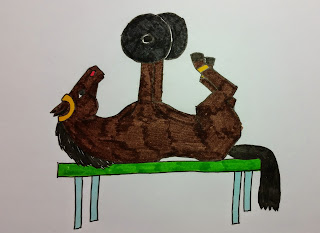 Verne Betchelder is back Nov 30 and I nabbed a spot to ride with him again.  I'd like to show some progress in our canter.  At least a little bit.  He's a great teacher but he doesn't like it when you're not putting in the effort.
Posted by Catie at 8:12 AM